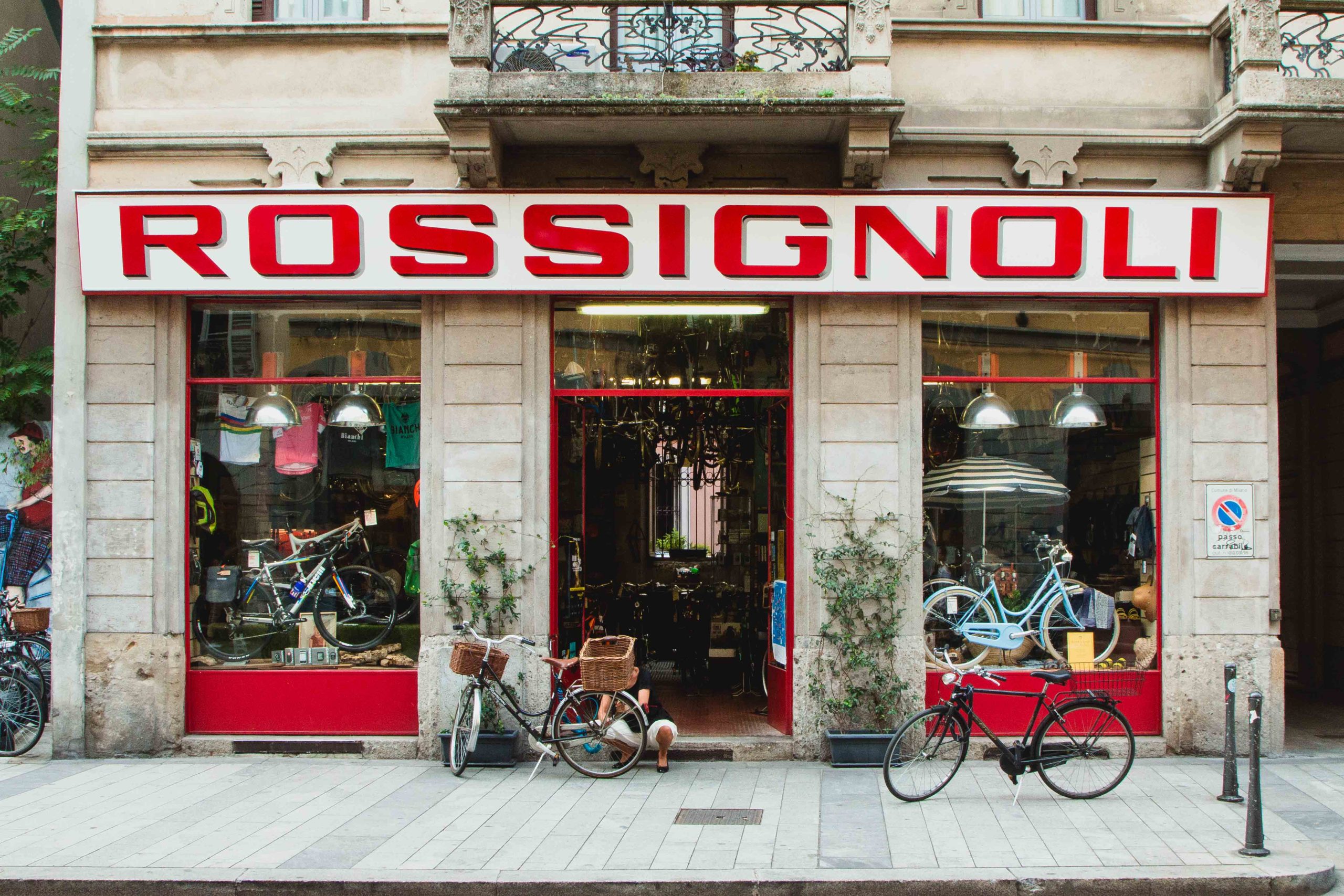 Brera Apartments is still continuing its journey among the iconic places of the city, where the Made in Milano is the main characteristic.

During this third stop we want to tell you about an historical bike shop: Rossignoli, that survived the 1929 crisis and World War II and has now arrived at these days, establishing itself as the main bike store in the city, as bike recovery laboratory, and as bike rental shop for the tourists that want to visit the city on two wheels.

We’ve been to their shop in Corso Garibaldi 71 in order to interview the partners, who are very expert in the field. In the interview, they told us some curiosities about their historical activity, let’s discover them together.

Born at the beginning of the Twentieth Century, Rossignoli has become a true icon in Milan. How do you balance tradition and innovation in your shop?

There is no secret recipe: every day we look around and we try to interpret people’s tastes, the changes of fashion and habits, the evolution in the use of bike. More than a strategic plan, it’s the result of experience and passion. Our roots and the long story behind it – almost 120 years – represent a great added value and a great responsibility, but they also risk being a burden: for this reason, one must always look ahead, without forgetting where they come from.

How is a Rossignoli bike born? Where does the inspiration for a new model come from?

Everyday we listen to several bikers and to their needs. Then we start from our taste, we talk with the frame builder and with the painter, and that’s how we create a new bike.

How has the relationship between the citizens of Milan and the bike evolved during time?

In the decades, the bike has been considered a required work instrument and a means of transport for thousands of citizens (like in the years of the post-war Milan) and it was almost forgotten in the basements during the Eighties. But now wind is slowly changing and the Milanese people, who are pragmatic and who have a strong sense of taste, have understood that biking in the city is convenient, beautiful and low-cost. With a little more effort from the institutions, Milan could be easily considered like the other European cycling cities. We believe it.

You rent bikes to tourists and Milanese people so that they can discover the city. Can you suggest us a path?

Milan is our city and we love all of its secret beauty and its great contradictions. It mixes a millennial history with a forward-looking glance. For this reason, we suggest a bike route in the old Milan and in the new futuristic districts: you can leave from Rossignoli, cross Parco Sempione (the Napoleonic Arena which hosted the arrival of the Giro d’Italia, the Triennale with its breathtaking design, the Arco della Pace) and reach City Life, surrounded by the green of the park and the buildings’ vertigo. Then straight to Santa Maria delle Grazie and Sant’Ambrogio, our beloved churches. You can come back riding in Garibaldi and under the Bosco Verticale.

You collaborate with brands and companies, making costumed bikes or renting them for movies, spots, photo shootings, catwalks and interior design. Where does the idea come from?

We’ve always tried to meet the needs of companies, producers and advertisers, with a variety of bikes and the readiness to interpret their taste and their needs. But of course, thinking that our family company, with an artisanal production, has made bikes for Milan, Inter and now also for Juventus, it’s a great matter of proud.

How do costumers perceive the shop, and which added value you offer them?

The added value is built with technical competence, and by continually training our technicians with courses at Shimano, Campagnolo and Bosch, and letting them handle with the best bikes in the market. This creates a special alchemy: in our “old-Milan style” shop you can find the most modern racing bikes, which arrive at Rossignoli for an inspection, a suggestion or simply to organize the next bike ride. In addition, we always try to get the best accessories of the market: Garmin GPS, Brooks saddles, Ortlieb bags. We also have a department dedicated to technical clothing for the most demanding clients.

“Biciclette Ritrovate”, the exhibition of the most beautiful and important bikes of all times, is one of the most beloved appointments of Fuori Salone. Can you tell us how the event was created?

During a dinner in 2006, in front of a bowl of pasta, Giovanna Rossignoli said: “Why don’t we free the courtyards of Corso Garibaldi 71 (which are normally used as parking lot) and we show for a day the beautiful bikes of our collector friends?”. Twelve years later Biciclette Ritrovate has become one of the main appointments of Fuorisalone: in April, more than ten thousand could see with their eyes the bikes of Pantani, Coppi, Bartali, Binda, other ancient bikes, elegant uniforms and vintage accessories. A paradise for those who love bikes and a joy for us.

What will you organize on the occasion of Milan Bike City?

On Thursday, September 27, we are organizing an evening dedicated to the presentation of the new circuit “Milano Gravel Roads”, dedicated to the new gravel bikes and we will talk with the guys of Fulgenzio Tacconi: in August, they have ridden 1200 km in 5 days, with an incredible 25 thousand drop. One of them is our super mechanic Roberto D’Anna.

If you want to visit the city on a Rossignoli bike or you’d like to buy one of its models, here you can find their address: