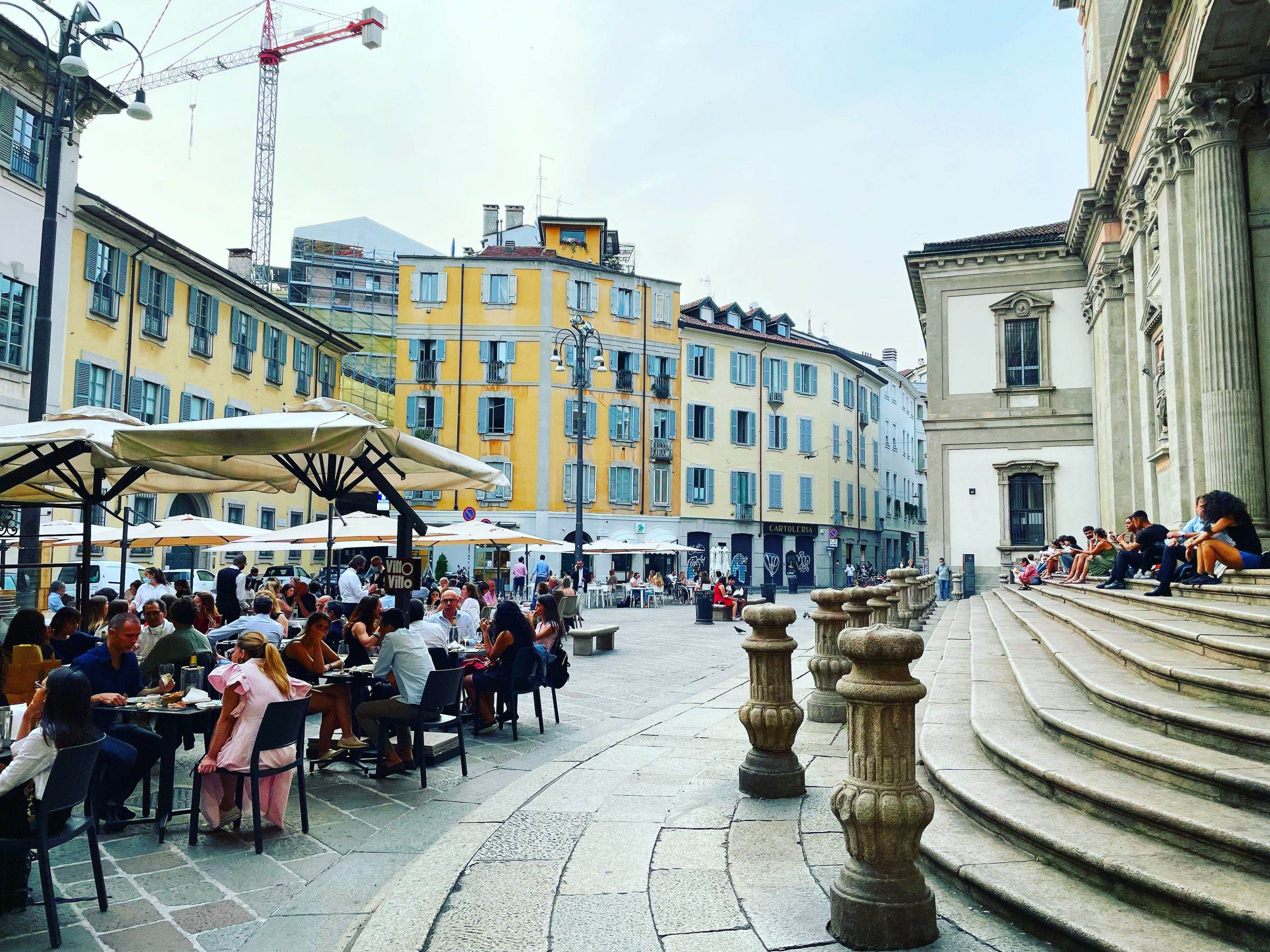 When you say Milan, you immediately think of Piazza del Duomo, but the Ambrosian city hides glimpses of rare beauty beyond the equestrian statue of Vittorio Emanuele II, which rises in its centre and faces the Madonnina. Here is a small selection of five of the most beautiful and well-loved squares – from the baroque Sant’Alessandro to the iconic Gae Aulenti – each with its own style and history.

1) Piazza del Carmine In the heart of the Brera area, after Corso Garibaldi and Via Mercato, we find this small, pastel-coloured and elegant square, far from the metropolitan bustle but no less poetic. The complex of the Church of Santa Maria del Carmine rises from its centre with its Neogothic-style façade, nearby two other “temples of veneration”, this time of fashion: the Marc Jacobs store and Nespresso X Chiara Ferragni Temporary Café (until 8 July 2021). And then there’s the outdoor aperitif, with charcuterie boards from Carmine Bistrot & great cocktails and mixed drinks from God Save the Food.

2) Piazza Sant’Eustorgio This discreetly charming piazza hosts one of the oldest monument complexes of Milan, the cloister of Sant’Eustorgio (composed of a basilica, basilica museum and Diocesan museum. And the rich schedule of cultural events that will animate the summer include “aperitivi con l’arte” (aperitifs with art), small tours including an aperitif at Chiostro Bistrot and entrance to the temporary exhibitions.

3) Piazza Sant’Alessandro Defined as the “most Roman” of Milanese squares, it is perhaps the most surprising agorà of the centre: hub to students from the nearby Università Statale, it is dominated by the namesake church of Sant’Alessandro in Zebedia, example of early Lombard baroque, and surrounded by locations to drink and snack in style: “le schiacciate” of Antico Vinaio are a must-try, seated on the steps of the parish, and the selection of Italian and international wines and liquors from Vino Vino features more than 500 labels in the cantina.

4) Piazza Città di Lombardia With its pointed arch shape and 4,000m2 size, this recently constructed piazza – the largest covered piazza in Europe – is often the location for cultural and sports event, and hosts various restaurants and cafés, as well as businesses and an auditorium under its glass ceiling, and even an enormous ice skating rink during the winter.

5) Piazza Gae Aulenti Nearly 10 years old and winner of the prestigious “Landscape Institute Award”, the piazza dedicated to one of the most important Italian contemporary designers is the diamond in the crown of the recovery project of the Porta Nuova neighbourhood, located between the Isola and Porta Garibaldi station areas. Splendid shopping and sipping of Made in Milan aperitifs await in the shadow of Italy’s tallest skyscraper – the Unicredit Tower. Pop in nearby at The Via Terrace of Via Aristotele Fioravanti 6 for a roof-top cocktail with a view of the Bosco Verticale!